Exemplar Problem: 43 : In the following schematic diagram for the preparation of hydrogen gas as shown in Figure 2.3, what would happen if following changes are made? 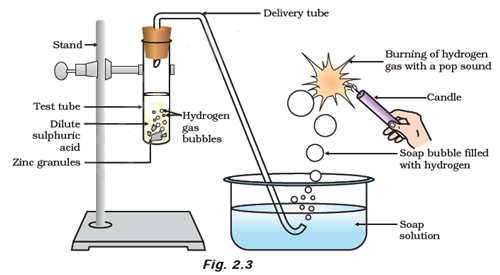 (a) In place of zinc granules, same amount of zinc dust is taken in the test tube

(b) Instead of dilute sulphuric acid, dilute hydrochloric acid is taken

(c) In place of zinc, copper turnings are taken

(d) Sodium hydroxide is taken in place of dilute sulphuric acid and the tube is heated.

Thus, when zinc dust is used in the place of zinc granules, hydrogen gas is produced at a faster rate.

(b) Zinc granules give hydrogen gas; along with zinc chloride; when they react with hydrochloric acid.

Thus, when hydrochloric acid is used at the place of sulphuric acid, zinc chloride is formed in place of zinc sulphate; along with hydrogen gas and reaction takes place at the same rate.

(c) Copper does not react with dilute acids in normal condition because copper lies at lower position in reactivity series and is considered as a noble metal.

Thus, if copper turning is taken in place of zinc granules, no reaction will take place.

(a) how will it affect the taste of the cake and why?

(b) how can baking soda be converted into baking powder?

(c) what is the role of tartaric acid added to baking soda?

(b) By mixing of edible oil, usually tartaric acid, baking soda is converted into baking powder. Other mild edible oil is also used instead of tartaric acid.

(c) Tartaric acid gives hydrogen ion when water is added to it. Hydrogen ion produced by tartaric acid reacts with sodium bicarbonate and gives carbon dioxide which makes the dough soft and spongy. If sodium carbonate is formed because of heating, tartaric acid neutralizes it and forms sodium tartarate which has pleasant smell and good taste.

Acid Base and Salt will be available online in PDF book form soon. The solutions are absolutely Free. Soon you will be able to download the solutions.