In combustion reaction, carbon compounds are oxidized in the presence of oxygen. The following example is different because alkaline KMnO4 is the oxidizing agent in this reaction.

Formation of larger molecules by addition of more radicals is known as addition reaction.

Ethene is converted into ethane when heated with the catalyst nickel.

When methane reacts with chlorine gas in the presence of sunlight, it gives chloromethane and hydrogen chloride. 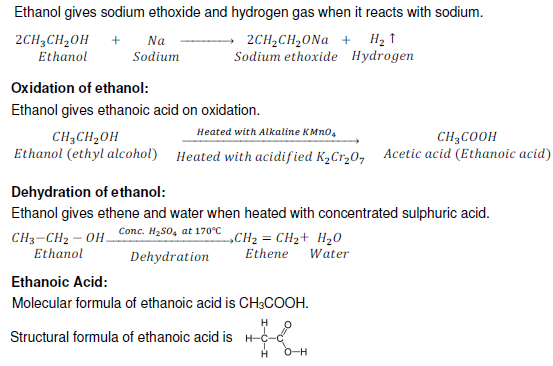 Reaction of ethanoic acid with base:

Ester is a sweet smelling compound. It is used in making perfumes and as a flavouring agent.

When ethyl ethanoate reacts with a base or acid, it gives back ethanol and ethanoic acid.

This reaction is called saponification, since it is used in making of soap.

Reaction of ethanoic acid with sodium carbonate and sodium bicarbonate:

Soap molecule has two ends. One end is hydrophilic and another end is hydrophobic. In other words, one end is lipophobic (hydrophilic) and another end is lipophilic (hydrophobic). When soap is dissolved in water and clothes are put in the soapy solution, soap molecules converge in a typical fashion to make a structure; called micelle. The hydrophobic ends of different molecules surround a particle of grease and make the micelle; which is a spherical structure. In this, the hydrophilic end is outside the sphere and hydrophobic end is towards the centre of the sphere. That is how, soap molecules wash away dirt and grease by making micelles around them.

Soap and Hard Water: Hard water often contains salts of calcium and magnesium. Soap molecules react with the salts of calcium and magnesium and form a precipitate. This precipitate begins floating as an off-white layer over water. This layer is called scum. Soaps lose their cleansing property in hard water because of formation of scum. Detergents are used; instead of soaps; in hard water to overcome the problem. Detergents are usually ammonium or sulphonate salts of carboxylic acids. The charged ends of these compounds do not form precipitate with calcium or magnesium salts in hard water. Hence, detergents retain their cleansing property in hard water.