International Union of Pure and Applied Chemistry (IUPAC) decided some rules to name the carbon compounds. This was done to maintain the uniformity throughout the world. Names which are given on this basis are popularly known as IUPAC name.

Unsaturated hydrocarbon with double bond having two carbon atoms is named as Ethene.

Unsaturated hydrocarbon with triple bond between carbon atoms is named as Ethyne.

(2) If the structure has branched chain, identify the longest chain and then identify the number of carbon atoms.

Identify the longest chain. Then number the carbon atoms in such a fashion that the functional group; if any; would come at the lowest number.

In the given figure (c), while counting from right to left (in red color), branched chain which is functional group falls at the fourth position. On the other hand, while counting from left to right, the branched chain falls at the fifth position. In this case, the numbering from right to left is taken because then only the functional would be at the lowest position. 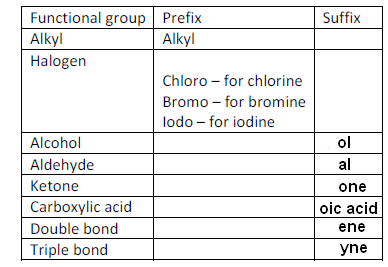 Number of carbon atoms in the longest chain = 3.

A methyl group is present at carbon number 2.

So, IUPAC Name is 2-methyl propane.

Numbering of carbon atoms is done in two ways, i.e. from left to right and from right to left.

The number of carbon atoms in the longest chain = 4.

A methyl group (functional group) is attached with this chain.

Therefore, IUPAC name of this compound is 2-methyl butane.

Two methyl groups are present at second (2) carbon atom. (Di is used as prefix for two).

Naming of hydrocarbon with Halo group:

There is one carbon atom in this compound. So its parent name is Methane.

One chloro group is present in this compound.

So, its IUPAC name is Chloro-methane.

Number of carbon atom: 1 (one)

The suffix of aldehyde group is “al”.

IUPAC name of alkane having aldehyde group is written as follows:

Number of carbon atom: 1 (one)

Thus an alkane having carboxylic acid is named as: >Example:

Number of carbon atom: 1(one)

Suffix for ketone group: ‘one’.

A hydrocarbon having ketone group is named as:

(a) Compounds of same homologous series have same general formula.

(e)Compounds of same homologous series differ by physical properties with increase or decrease in molecular mass.