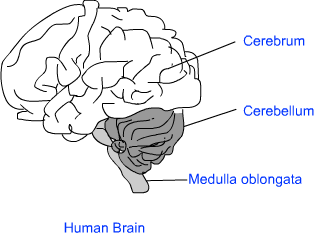 Human brain is a highly complex organ; which is mainly composed of the nervous tissue. The tissues are highly folded to accommodate a larger surface area in less space. The brain is covered by a three layered system of membranes; called meninges. Cerebrospinal fluid is filled between the meninges. The CSF provides cushion to the brain against mechanical shocks. Furthermore, the brain is housed inside the skull for optimum protection. The human brain can be divided into three regions, viz. forebrain, midbrain and hindbrain.

Forebrain:- It is composed of the cerebrum.

Midbrain:- It is composed of the hypothalamus.

Hindbrain:- It is composed of the cerebellum, pons and medulla oblongata.

Some main structures of the human brain are explained below.

Cerebrum: The cerebrum is the largest part in the human brain. It is divided into two hemispheres; called cerebral hemispheres.

It is the seat of learning and memory.

Hypothalamus: The hypothalamus lies at the base of the cerebrum. It controls sleep and wake cycle (circadian rhythm) of the body. It also controls the urges for eating and drinking.

Cerebellum: Cerebellum lies below the cerebrum and at the back of the whole structure. It coordinates the motor functions. When you are riding your bicycle; the perfect coordination between your pedaling and steering control is achieved by the cerebellum. 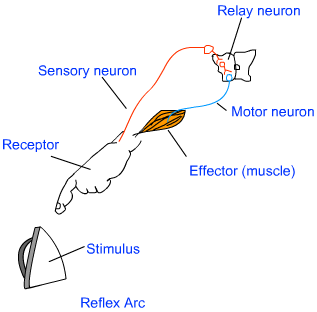 Medulla: Medulla forms the brain stem; along with the pons. It lies at the base of the brain and continues into the spinal cord. Medulla controls various involuntary functions; like hear beat, respiration, etc.

Reflex action is a special case of involuntary movement in voluntary organs. When a voluntary organ is in the vicinity of a sudden danger, it is immediately pulled away from the danger to save itself. For example; when your hand touches a very hot electric iron, you move away your hand in a jerk. All of this happens in flash and your hand is saved from the imminent injury. This is an example of reflex action.

Reflex Arc: The path through which nerves signals; involved in a reflex action; travel is called the reflex arc. The following flow chart shows the flow of signal in a reflex arc.

Muscular Movements and Nervous Control: Muscle tissues have special filaments; called actin and myosin. When a muscle receives a nerve signal; a series of events is triggered in the muscle. Calcium ions enter the muscle cells. It results in actin and myosin filaments sliding towards each other and that is how a muscle contracts. Contraction in a muscle brings movement in the related organ.

Class Ten Science will be available online in PDF book form soon. The solutions are absolutely Free. Soon you will be able to download the solutions.