Question: 45: Draw the structure of a neuron and explain its function. 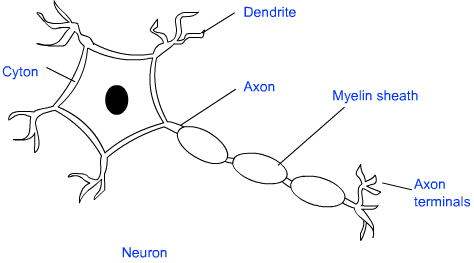 Question:46: What are the major parts of the brain? Mention the functions of different parts.

Answer: The major parts of the brain and their functions are as follows:

(a) Cerebrum: It controls the voluntary actions and is the site for sensory perceptions.

(b) Cerebellum: It coordinates the motor function and maintains posture and balance.

Brain gets the maximum protection, as it is housed inside the skull. Spinal cord gets protection by the vertebral column. Additionally, the brain and the spinal cord are surrounded by a system of three layers; called meninges. The cerebrospinal fluid; filled between these membranes; provides a cushion against mechanical shocks.

48. Mention one function for each of these hormones :

Answer: Prepares the body for 'fight or flight' response.

Answer: Triggers sperm production and is responsible for the development of secondary sexual characters in males.

Answer: Various plant hormones and their effects are as follows:

(a) Auxin: Promotes cell elongation and thus promotes growth of a plant part.

(d) Abscissic acid: Inhibits growth and is responsible for shedding or older parts.

Question:50. What are reflex actions? Give two examples. Explain a reflex arc.

Answer: Reflex action is a special case of involuntary movement in voluntary organs. When a voluntary organ is in the vicinity of a sudden danger, it is immediately pulled away from the danger to save itself. For example; when your hand touches a very hot electric iron, you move away your hand in a jerk. All of this happens in flash and your hand is saved from the imminent injury. This is an example of reflex action.

Reflex Arc: The path through which nerves signals; involved in a reflex action; travel is called the reflex arc. The following flow chart shows the flow of signal in a reflex arc.

51. "Nervous and hormonal systems together perform the function of control and coordination in human beings." Justify the statement.

Answer: The nervous system controls and coordinates all the functions in the body. It carries out its functions in close coordination with the hormonal system. Nerves don't reach every nook and corner of the body and hence needs assistance from the hormones to control all the parts of the body. Moreover, while the nervous control is somewhat faster, hormonal control is slower. Hormonal control is mainly based on feedback mechanism and tells the body to either pace up or slow down; as per the situation. Nervous control, on the other hand, is more of a direct control. Both of them complement each other. Thus, it can be said that nervous and hormonal systems together perform the function of control and coordination in human beings.

52. How does chemical coordination take place in animals?

Answer: Chemical control takes place through hormones in animals. Hormones are directly released in the bloodstream and reach an effector. Hormones tell the brain when to pace up or slow down a particular function. It is mainly based on the feedback mechanism.

53. Why is the flow of signals in a synapse from axonal end of one neuron to dendritic end of another neuron but not the reverse?

Answer: The flow of signals through neurons takes place in the form of specialized chemicals; called neurotransmitters. The neurotransmitters can only enter a neuron through dedicated receptor channels. Such receptor channels are only present at the dendritic end but not at the axonal end. Hence, the flow of signals in a synapse happens from axonal end of one neuron to dendritic end of another neuron but not in the reverse direction.

Control and Coordination will be available online in PDF book form soon. The solutions are absolutely Free. Soon you will be able to download the solutions.