Question: 1. A piece of wire of resistance R is cut into five equal parts. These parts are then connected in parallel. If the equivalent resistance of this combination is Râ€˛, then the ratio R/Râ€˛ is

The piece of wire having resistance equal to R is cut into five equal parts.

Question: 2:- Which of the following terms does not represent electrical power in a circuit?

After substituting the value of V = IR in this we get

To solve this problem, first of all resistance of the bulb is to be calculated.

Question: 4:- Two conducting wires of the same material and of equal lengths and equal diameters are first connected in series and then parallel in a circuit across the same potential difference. The ratio of heat produced in series and parallel combinations would be

Resistance of the wire = R

Resistance when the given wires connected in series = Rs

Resistance when the given wires connected in parallel = Rp

Heat produced when the given wires connected in series = Hs

Heat produced when the given wires connected in parallel = Hp 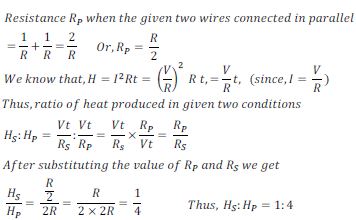 Question: 5. How is a voltmeter connected in the circuit to measure the potential difference between two points?

Answer: Voltmeter is connected into parallel to measure the potential difference between two points in a circuit.

Question: 6. A copper wire has diameter 0.5 mm and resistivity of 1.6 Ă— 10 8 Î© m. What will be the length of this wire to make its resistance 10 Î©? How much does the resistance change if the diameter is doubled? 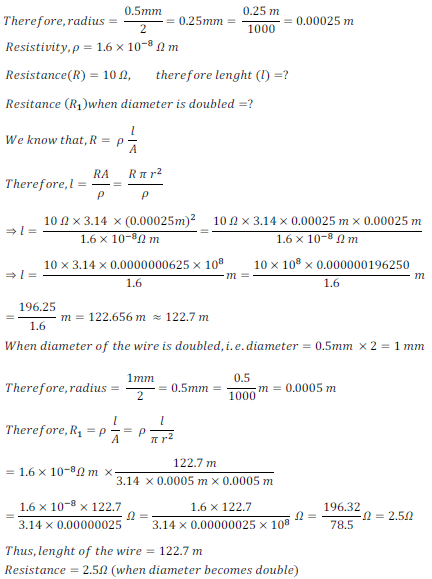 Question: 7. The values of current I flowing in a given resistor for the corresponding values of potential difference V across the resistor are given below

Plot a graph between V and I and calculate the resistance of that resistor.

Since slope of the graph will give the value of resistance, thus

Let consider two points A and B on the slope.

Draw two lines from B along X-axis and from A along Y-axis, which meets at point C

Question: 8. When a 12 V battery is connected across an unknown resistor, there is a current of 2.5 mA in the circuit. Find the value of the resistance of the resistor.

Current through resistor having resistance equal to 12Î© =?

Since, there is no division of electric current, in the circuit if resistors are connected in series, thus, resistance through the resistor having resistance equal to 12 Î© = 0.671 A