Question: 1. What does an electric current mean?

Question: 2- Define the unit of current.

Answer:- SI unit of electric current is ampere (A).

Question: 3 - Calculate the number of electrons constituting one coulomb of charge.

Question: 4 - Name a device that helps to maintain a potential difference across a conductor.

Answer:- Battery or a cell

Question: 5. What is meant by saying that the potential difference between two points is 1 V?

Answer: This means 1 joule of work is done to move a charge of 1 coulomb between two points.

Question: 6. How much energy is given to each coulomb of charge passing through a 6 V battery?

Question: 7 - On what factors does the resistance of a conductor depend?

Answer: Resistance of a conductor depends upon:

(a) Nature of conductor

(b) Length of conductor

Question: 8. Will current flow more easily through a thick wire or a thin wire of the same material, when connected to the same source? Why?

Answer: Since, resistance is indirectly proportional to the area of cross section, thus current flows easily through a thick wire compared to a thin wire of the same material.

Question: 9. Let the resistance of an electrical component remain constant while the potential difference across the two ends of the component decreases to half of its former value. What change will occur in the current through it?

Therefore, if potential difference between two ends of the component will be halved, and resistance remains constant, then electric current would also be halved.

Question: 10. Why are coils of electric toasters and electric irons made of an alloy rather than a pure metal?

Answer: Since, alloys have higher melting point than pure metal so coils of electric toasters and electric irons are made of an alloy rather than a pure metal to retain more heat without melting.

Question: 11. Use the data in Table 12.2 to answer the following

(a) Which among iron and mercury is a better conductor?

(b) Which material is the best conductor? 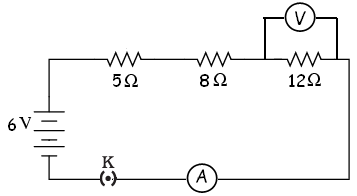 Since, resistances are connected in series, thus electric current remains the same through all resistors.

Thus, potential difference, V through the resistor of 12Ω = I x R

Reading of voltmeter through resistor of 12Ω = 2.88V