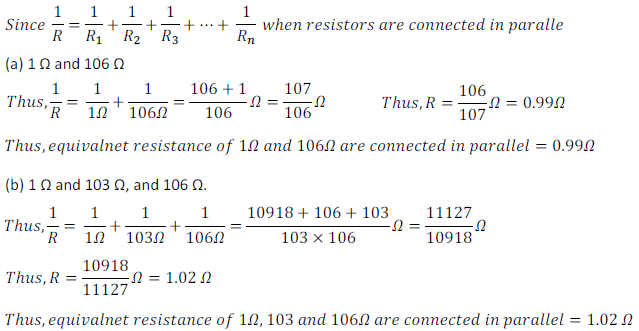 What is the resistance of an electric iron connected to the same source that takes as much current as all three appliances, and what is the current through it?

Since it takes as well current as three appliances, thus electric current through it = 7.04A

Thus, electric current through the electric iron = 7.04A

Question: 16:- What are the advantages of connecting electrical devices in parallel with the battery instead of connecting them in series?

(a) Voltage remains same in all the appliances.

(b) When all the three resistance is connected in parallel then

When all the three resistance will be connected in parallel, then the total effective resistance in the circuit = 1 Ω

Answer: When all the resistors are connected in series

(b) When all the resistors are connected in series

Question: 19. Why does the cord of an electric heater not glow while the heating element does?

The resistance of heating element is very high compared to the cord of an electric heater. Since, heat produced is directly proportional to the resistance, thus element of electric heater glows because of production of more heat and cord does not.

Question: 20. Compute the heat generated while transferring 96000 coulomb of charge in one hour through a potential difference of 50 V.

Question: 21. An electric iron of resistance 20 Ω takes a current of 5 A. Calculate the heat developed in 30 s.

Question: 22. What determines the rate at which energy is delivered by a current?

Answer: Since electric power is the rate of consumption of electric energy in any electrical appliance. Hence, rate at which energy is delivered by a current is the power of electric appliance.

Question: 23. An electric motor takes 5 A from a 220 V line. Determine the power of the motor and the energy consumed in 2 h.