(a) Saprophytic Nutrition:- In saprophytic nutrition, the digestion of food takes place before ingestion of food. This type of nutrition is usually seen in fungi and some other microorganisms. The organism secretes digestive enzymes on the food and then ingests the simple substances. Saprophytes feed on dead materials and thus help in decomposition dead remains of plants and animals.

(1) Ingestion:- The process of taking in the food is called ingestion.

(2) Digestion:- The process of breaking complex food substances into simple molecules is called digestion. Simple molecules; thus obtained; can be absorbed by the body.

(3) Absorption:- The process of absorption of digested food is called absorption.

(4) Assimilation:- The process of utilization of digested food; for energy and for growth and repair is called assimilation.

(5)Egestion:- The process of removing undigested food from the body is called egestion.

Structure of the Human Digestive System:

Mouth or Buccal Cavity: The mouth has teeth and tongue. Salivary glands are also present in the mouth. The tongue has gustatory receptors which perceive the sense of taste. Tongue helps in turning over the food, so that saliva can be properly mixed in it. 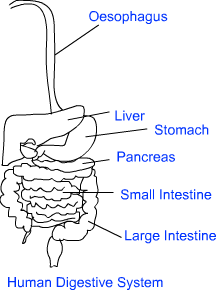 Oesophagus: Oesophagus is also known as food pipe. It begins from the neck and ends in the stomach. No digestion takes place in oesophagus.

Stomach: Stomach is a bag-like organ. Highly muscular walls of the stomach help in churning the food. The walls of stomach secrete hydrochloric acid. Hydrochloric acid kills the germs which may be present in food. Moreover, it makes the medium inside stomach as acidic. The acidic medium is necessary for gastric enzymes to work. The enzyme pepsin; secreted in stomach; does partial digestion of protein. The mucus; secreted by the walls of the stomach saves the inner lining of stomach from getting damaged from hydrochloric acid.

Liver: Liver is the largest organ in the human body. Liver manufactures bile; which gets stored in gall bladder. From the gall bladder, bile is released as and when required.

Pancreas: Pancreas is situated below the stomach. It secretes pancreatic juice which contains many digestive enzymes.

Bile and pancreatic juice go to the duodenum through a hepato-pancreatic duct. Bile breaks down fat into smaller particles. This process is called emulsification of fat. After that, the enzyme lipase digests fat into fatty acids and glycerol. Trypsin and chymotrypsin are enzymes which digest protein into amino acids. Complex carbohydrates are digested into glucose. The major part of digestion takes place in the duodenum.

Life Processes will be available online in PDF book form soon. The solutions are absolutely Free. Soon you will be able to download the solutions.