The circulatory system is responsible for transport of various substances in human beings. It is composed of the heart, arteries, veins and blood capillaries. Blood plays the role of the carrier of substances.

Heart: Heart is a muscular organ; which is composed of cardiac muscles. It is so small that it can fit inside and adult's fist. The heart is a pumping organ which pumps the blood. The human heart is composed of four chambers, viz. right auricle, right ventricle, left auricle and left ventricle.

Capillaries:- These are the blood vessels which have single-celled walls.

Blood:- Blood is a connective tissue which plays the role of the carrier for various substances in the body. Blood is composed of plasma, blood cells and platelets.

Blood Plasma:- Blood plasma is a pale coloured liquid which is mostly composed of water. Blood plasma forms the matrix of blood.

White Blood Corpuscles (WBCs):- These are of pale white colour. They play important role in the immunity.

Platelets:- Platelets are responsible for blood coagulation. Blood coagulation is a defense mechanism which prevents excess loss of blood; in case of an injury.

Lymph:- Lymph is similar to blood but RBCs are absent in lymph. Lymph is formed from the fluid which leaks from blood capillaries and goes to the intercellular spaces in the tissues. This fluid is collected through lymph vessels and finally returns to the blood capillaries. Lymph also plays an important role in the immune system.

Double Circulation:- In the human heart, blood passes through the heart twice in one cardiac cycle. This type of circulation is called double circulation. One complete heart beat in which all the chambers of the heart contract and relax once is called cardiac cycle. The heart beats about 72 times per minute in a normal adult. In one cardiac cycle, the heart pumps out 70 mL blood and thus about 4900 mL blood in a minute. Double circulation ensures complete segregation of oxygenated and deoxygenated blood which is necessary for optimum energy production in warm-blooded animals.

Circulation of Blood through the heart:

Removal of harmful waste from the body is called excretion. Many wastes are produced during various metabolic activities. These need to be removed in time because their accumulation in the body can be harmful and even lethal for an organism.

The human excretory system is composed of a pair of kidneys. A tube; called ureter; comes out of each kidney and goes to the urinary bladder. Urine is collected in the urinary bladder, from where it is expelled out through urethra as and when required.

Kidney: Kidney is a bean-shaped organ which lies near the vertebral column in the abdominal cavity. The kidney is composed of many filtering units; called nephrons. Nephron is called the functional unit of kidney.

Nephron: It is composed of a tangled mess of tubes and a filtering part; called glomerulus. Glomerulus is a network of blood capillaries to which renal artery is attached. The artery which takes blood to the glomerulus is called afferent arteriole and the one receiving blood from the glomerulus is called efferent arteriole. Glomerulus is enclosed in a capsule like portion; called Bowman's capsule. The Bowman's capsule extends into a fine tube which is highly coiled. Tubes from various nephrons converge into collecting duct; which finally goes to the ureter. 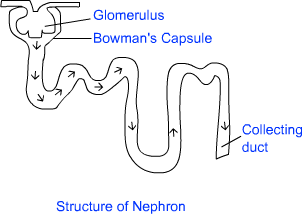 Filtration in Glomerulus: Filtration happens because of very high pressure inside the glomerulus. The lumen of efferent arteriole is smaller than that of afferent arteriole. Due to this, the blood entering the glomerulus experiences very high pressure and due to this, the waste products are filtered out through the thin membrane of capillaries in the glomerulus. The filtered blood is sent to the systemic circulation through efferent arteriole and the filtrate goes to the Bowman's capsule. That is how urine is formed inside the kidneys. Reabsorption of water and some other filtrates takes place in the tubular part of the nephron. This increases the concentration of urine. The human urine is mainly composed of water and urea.

Life Processes will be available online in PDF book form soon. The solutions are absolutely Free. Soon you will be able to download the solutions.