There are only two possibilities of position of object in the case of a concave lens:-

(a) Object is at infinity

(b) Object is between optical centre, O and infinity

(a) Object is at infinity:-

A highly diminished point sized, virtual and erect image is formed when object is at infinity by a concave lens at principal focus F1.

Position of image:- At F1

Nature of image: Virtual and erect

(b) Object is between optical centre, O and infinity:

A diminished, virtual and erect image is formed between principal focus F1 and optical centre, O; when object is placed between optical centre and infinity of a concave lens.

Position of image:- Between F1 and O

Nature of image:- Virtual and erect

The new sign convention is known as New Cartesian Sign Convention. In this sign is taken negative towards left and taken as positive towards right at X-axis from origin. 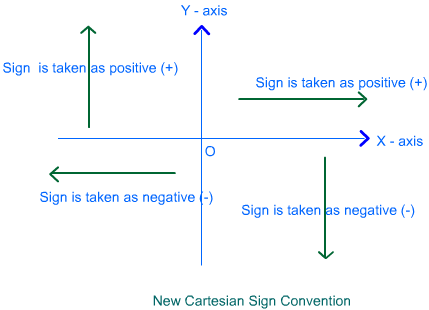 Light: Reflection and Refraction will be available online in PDF book form soon. The solutions are absolutely Free. Soon you will be able to download the solutions.