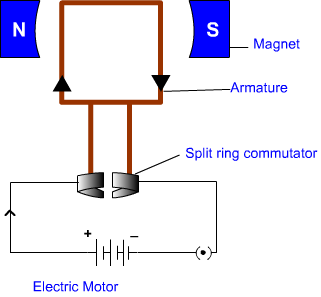 Electrical energy is converted into mechanical energy by using an electric motor. Electric motor works on the basis of rule suggested by Marie Ampere and Fleming's Left Hand Rule.

In an electric motor, a rectangular coil is suspended between the two poles of a magnetic field. The electric supply to the coil is connected with a commutator. Commutator is a device which reverses the direction of flow of electric current through a circuit.

Question: 12 :- Name some devices in which electric motors are used.

Question: 14 :- Two circular coils A and B are placed close to each other. If the current in the coil A is changed, will some current be induced in the coil B? Give reason.

Question: 16 - Explain the underlying principle and working of an electric generator by drawing a labelled diagram. What is the function of brushes? 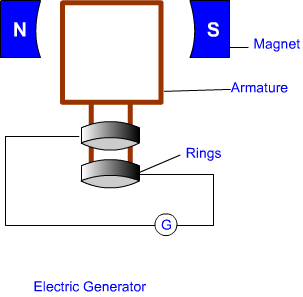 To convert an AC generator into a DC generator, a split ring commutator is used. This helps in producing direct current.

Question: 17 - When does an electric short circuit occur?

Answer: When positive and negative wires touch each other, the resistance suddenly decreases and current increases. This leads to excessive heating of wire which manifests in the form of sparks. This is called short circuit.

Question: 18 - What is the function of an earth wire? Why is it necessary to earth metallic appliances?

Magnetic Effect of Electric Current will be available online in PDF book form soon. The solutions are absolutely Free. Soon you will be able to download the solutions.