How do Organisms Reproduce?

28. In a bisexual flower inspite of the young stamens being removed artificially, the flower produces fruit. Provide a suitable explanation for the above situation.

29. Can you consider cell division as a type of reproduction in unicellular organism? Give one reason.

30. What is a clone? Why do offsprings formed by asexual reproduction exhibit remarkable similarity?

31. Explain how, offspring and parents of organisms reproducing sexually have the same number of chromosomes?

32. Colonies of yeast fail to multiply in water, but multiply in sugar solution. Give one reason for this.

Answer: When the colony of yeast is in water, it does not get nutrition; because water does not have nutrients. Sugar, on the other hand, provides nutrition. Once the yeast gets nutrition, it grows and begins producing buds. That is why, colonies of yeast fail to multiply in water, but multiply in sugar solution.

Answer: Water is necessary for all metabolic activities. On the moist bread the spores of bread mold get the much needed water; which is not available on the dry bread. Hence, bread mould grows profusely on a moist slice of bread rather than on a dry slice of bread.

34. Give two reasons for the appearance of variations among the progeny formed by sexual reproduction.

Answer: The first and foremost reason for the appearance of variations among the progeny formed by sexual reproduction is, gene pool of the progeny is contributed by two different individuals. The second reason is that variations also happen during DNA replication before cell division.

35. Would a Planaria cut vertically into two halves regenerate into two individuals? Complete Figure ‘D’ and ‘E’ by indicating the regenerated regions.

(c) More the number of chromosomes/cells greater is the DNA content. Justify. 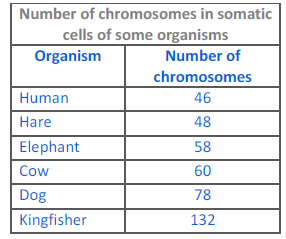 (b) Ability to reproduce depends on a variety of factors; like availability of nutrients, water, conducive environment and suitable mate. Number of chromosomes has no bearing on the ease by which an organism reproduces.

38. Why cannot fertilisation take place in flowers if pollination does not occur?

Answer: For fertilization to occur, it is necessary that the male gamete reaches the female gamete. This can only happen when the pollen grains are transferred to the stigma through any means of pollination. So, fertilization cannot take place in flowers if pollination does not occur.

39. Is the chromosome number of zygote, embryonal cells and adult of a particular organism always constant? How is the constancy maintained in these three stages?

Answer: The answer to the first part of this question is a definite yes. Meiosis is the cell division which happens during gametogenesis, i.e. during gamete formation. This results in number of chromosomes getting halved in gametes. When fertilization happens, the number of chromosomes becomes equal to that in somatic cells. After that, mitosis takes place during rest of the stages of life. And thus, the constancy of chromosomal number is maintained in all the three stages as mentioned in this question.

40. Where is the zygote located in the flower after fertilization?

Answer: After fertilization, zygote is located in the ovary.

41. Reproduction is linked to stability of population of a species. Justify the statement.

42. How are general growth and sexual maturation different from each other?

43. Trace the path of sperm during ejaculation and mention the gland and their functions associated with the male reproductive system.

Answer: The path of sperm during ejaculation is as follows:

Glands associated with the male reproductive system and their functions are as follows: ss="Answer"> (a) Testis: Secretes the hormone testosterone.

(b) Prostate gland: Makes the medium of semen alkaline

(d) Cowper's gland: The secretion of this gland lubricates the urethra before ejaculation and neutralizes the acidic traces of urine in the urethra

44. What changes are observed in the uterus if fertilisation does not occur?

Answer: The uterus prepares during every ovulation cycle in anticipation of a possible pregnancy. The lining of the uterus thickens so that it can give support to the developing embryo. When fertilization does not occur, this lining disintegrates because it is no longer required. The fragments of the lining are shed along with blood and the discarded egg; through the vagina. The discharge of discarded tissues is called menstrual flow and the process is called menstruation.

45. What changes are observed in the uterus subsequent to implantation of young embryo?

Answer: Once the zygote is implanted in the uterine wall, several changes take place in the uterus. The uterine lining thickens so that it can give support to the growing embryo. It is richly supplied with blood so that it can provide nourishment to the embryo.

46. What are the benefits of using mechanical barriers during sexual act?

(a) Production of egg

(b) Site of fertilization

(d) Entry of the sperms

48. What would be the ratio of chromosome number between an egg and its zygote? How is the sperm genetically different from the egg?

Class ten Science CBSE will be available online in PDF book form soon. The solutions are absolutely Free. Soon you will be able to download the solutions.