Question : 32 - What were the anomalies of Newland's Law of Octaves?

At the time of Newlands; about 56 elements were known and consequently, his octaves were limited to those elements. It seems he did not expect the discovery of more elements in the future.

Newlands Octaves could be applied up to calcium only.

Newlands put some elements together in one cell because they show similar properties. For example; he put cobalt (Co) and nickel (Ni) in one cell together. This created lot of confusion.

Iron was kept apart from cobalt and nickel while all these three elements have similar properties.

The above mentioned and many other anomalies made the Newlands' Law of Octaves limited to certain elements and finally his Law of Octaves could not be considered relevant even for many elements known during his time.

Question : 33 - With the help of suitable diagram, explain the structure of female human reproductive system. 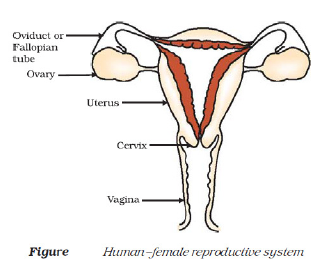 Uterus: It is hollow tube-like muscular organ which somewhat resembles the shape of a pear. The embryo gets implanted on the wall of the uterus and further development of the embryo happens inside the uterus.

Ovary: There is one ovary on each side of the uterus. Ovaries serve two purposes, i.e. production of eggs and secretion of the female hormones oestrogen and progesterone. The female hormones play an important role in the reproductive cycle and also bring out the secondary sexual characters in females. All the eggs in a female are manufactured while the girl child is still inside the womb. But these eggs are immature. One egg matures during each menstrual cycle and the process is called ovulation.

Question : 34 - What are the disadvantages of a large population? Suggest various methods of population control.

Answer: A large population presents many challenges. Limited amount of natural resources; especially the land for agriculture; means it would be very difficult to provide food for a large population. Managing a big family can be a big problem for the bread earner of the family. For the society also, a large population creates pressure on various resources.

Question 35 - The focal length of a convex lens is 20 cm. The object is at a distance of 30 cm from the lens. Find the image distance. Also write the nature of the image thus formed.

We can find the image distance by using the lens formula: 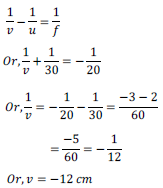 Thus, the object distance is -12 cm; the negative sign shows that the image if formed on the same side of the lens.

Magnification can be calculated as follows:

The positive sign shows that the image is erect and virtual.

Question 36 - You are given a convex lens but you do not know its focal length. Describe an activity by which you will find the focal length of the given convex lens.

Answer: For finding the approximate focal length of a given convex lens, we need following materials:

A lens stand, a ruler and a screen.

Select a distant object which is well lit by the sunlight. A tree or an electric pole can be ideal for this purpose.

Keep the screen in erect position.

Keep the lens between the object and the screen.

Adjust the distance between the screen and the lens so that you can get a clear image of the distant object on the screen.

The distance between the lens and the screen gives the approximate value of focal length of the given convex lens.

Class ten Science - Sample Paper - (1) for SA - 2 - Part -III will be available online in PDF book form soon. The solutions are absolutely Free. Soon you will be able to download the solutions.