Light: Light is a form of energy. It helps in the sense of vision. When light falls on an object, some of the light is reflected back to our eyes. Thus, we are able to see an object because of light being reflected from the object.

When light falls on a shiny surface, most of it bounces back. This phenomenon is called reflection of light.

There are two laws of reflection which are as follows: 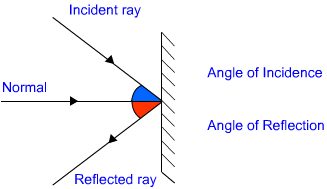 Formation of Image in Plain Mirror 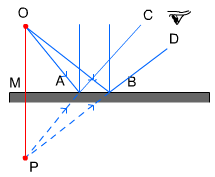 In this figure; PQ is a plain mirror and O is an object. OA and OC are the incident rays; coming from the object. The incident rays are reflected from the mirror and reflected rays emerge as AB and CD. If AB and CD are extended behind the mirror, they appear to meet at point 'I'. This is the point where image is formed. If OM is object distance and MI is image distance, then in plain mirror; OM = MI. This means image distance is equal to object distance in case of a plain mirror.

Some features of image formed by a plain mirror:

When two or more mirrors are placed at some angles to each other, we get to see multiple images. Let us take an example in which two mirrors are placed opposite to each other. If an object is placed between them, its image is formed in both the mirrors. The image in one mirror would act as an object for another mirror and this sequence would continue. This will result in the formation of multiple images.

The number of images formed depends on the angle between the two mirrors. This can be calculated by using the following formula:

Light will be available online in PDF book form soon. The solutions are absolutely Free. Soon you will be able to download the solutions.