Adolescence is the period during which several changes take place in the body; in order to attain reproductive maturity. The adolescence period usually begins at around 11 years of age and lasts till 18th year in girls and till 19th year in boys. Since these years are counted in 'teens' (as in thirteen and fourteen), hence the adolescence period is also called the teenage.

Puberty: The beginning of the adolescence period is called puberty. The puberty period ends when an adolescent reaches reproductive maturity.

The changes which take place during this period are as follows:

The following table shows percentage attainment of height in boys and girls at different years of the age. The percentages shown in this table can be utilized to calculate the approximate full height which a person is likely to attain in adulthood. 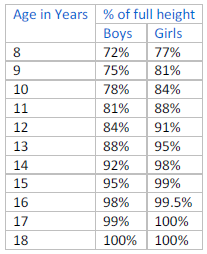 Voice Change: The voice box becomes enlarged in the boys. Due to this, the voice of a boy becomes low pitched and deep. Sometimes the voice may become hoarse in a boy due to sudden growth in the vocal cords. This situation persists for a few days and then the voice becomes normal. The voice box does not grow in girls and their voice remains low pitched.

Development of Sex Organs: In boys, the testes become mature and begin the production of sperms. In girls, the ovaries and eggs become mature and ovaries begin to release ovules. Usually a single egg is produced during an ovulation cycle.

Attainment of Emotional, Mental and Intellectual Maturity: An adolescent person tends to become more independent. He/she may spend more time all alone. The thinking ability of the person also develops. Sudden changes in the body may also develop some sense of insecurity in the person, but this is a part and parcel of the growing up process.

Secondary Sexual Characters in Male: Facial hairs develop in males and hairs also develop on the chest. The prominent protuberance in the neck is seen in males. This called the Adam's apple.

Common Secondary Sexual Characters in Males and Females: Hairs under the armpit and in the pubic region are common in male and female.

Hormonal Control on Changes During Adolescence: The changes which take place during adolescence are under the control of certain hormones. The male hormone; testosterone is released by the testes. This hormone stimulates the production of sperms. This hormone also promotes various secondary sexual characters in males.

The female hormone; oestrogen is released by the ovaries. This promotes ovulation, i.e. release of a mature egg from the ovary. This hormone also promotes various secondary sexual characters in females.

Reproductive Phase of Life in Humans

The menstrual cycle is usually of about 28 to 30 days. At the beginning of this cycle; ovulation starts and usually one egg is released from the ovary. The egg is transferred to the fallopian tube. The uterus gets ready in anticipation of a possible pregnancy. The uterine wall becomes thick so that it could be ready for the implantation of embryo. If fertilization does not take place, then the uterine thickening is shed off in small fragments. The fragments of the uterine lining and the egg are expelled out through the vagina; along with some blood. The flow of blood through the vagina is called menstruation. The menstrual flow last for about 4 to 7 days and marks the end of the menstrual cycle.

Menarche: The first menstrual flow is called menarche. It happens at the onset of puberty.

Menopause: The cessation of menstrual flow in the lifetime is called menopause. Menopause happens at around 45 to 50 years of age and marks the end of the reproductive phase in a female.

Various events during the menstrual cycle are controlled by different hormones.

Reaching the Age of Adolescence will be available online in PDF book form soon. The solutions are absolutely Free. Soon you will be able to download the solutions.