Force and Laws of Motion

Question: 1 - An object experiences a net zero external unbalanced force. Is it possible for the object to be travelling with a non-zero velocity? If yes, state the conditions that must be placed on the magnitude and direction of the velocity. If no, provide a reason.

Answer: When a net zero external unbalanced force is applied on the body, it is possible for the object to be travelling with a non-zero velocity. In fact, once an object comes into motion and there is a condition in which its motion is unopposed by any external force; the object will continue to remain in motion. It is necessary that the object moves at a constant velocity and in a particular direction.

Question: 2 - When a carpet is beaten with a stick, dust comes out of it. Explain.

Answer: Beating of a carpet with a stick; makes the carpet come in motion suddenly, while dust particles trapped within the pores of carpet have tendency to remain in rest, and in order to maintain the position of rest they come out of carpet. This happens because of the application of Newton's First Law of Motion which states that any object remains in its state unless any external force is applied over it.

Question:- 3 - Why is it advised to tie any luggage kept on the roof of a bus with a rope?

This is the cause that it is advised to tie any luggage kept on the roof a bus with a rope so that luggage can be prevented from falling down.

Question: 4 - A batsman hits a cricket ball which then rolls on a level ground. After covering a short distance, the ball comes to rest. The ball slows to a stop because

(a) the batsman did not hit the ball hard enough.

(b) velocity is proportional to the force exerted on the ball.

(c) there is a force on the ball opposing the motion.

(d) there is no unbalanced force on the ball, so the ball would want to come to rest.

Answer: (c) There is a force on the ball opposing the motion.

Explanation: When ball moves on the ground, the force of friction opposes its movement and after some time ball comes to the state of rest.

Question: 5 - A truck starts from rest and rolls down a hill with a constant acceleration. It travels a distance of 400 m in 20 s. Find its acceleration. Find the force acting on it if its mass is 7 tonnes (Hint: 1 tonne = 1000 kg.)

Initial velocity of truck (u) =0 (Since, truck starts from rest) 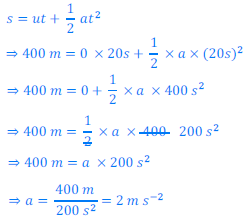 Question: 6 - A stone of 1 kg is thrown with a velocity of 20 m/s across the frozen surface of a lake and comes to rest after travelling a distance of 50 m. What is the force of friction between the stone and the ice?

Thus, force of friction acting upon stone = -4ms-2. Here negative sign shows that force is being applied in the opposite direction of the movement of the stone.

Force and Laws of Motion will be available online in PDF book form soon. The solutions are absolutely Free. Soon you will be able to download the solutions.

Forces and Laws of Motion