Structure of The Atom

Matters are made of tiny particles called atom. Atom is made of three particles; electron, proton and neutron. These particles are called fundamental particles of an atom or sub atomic particles.

Electron (e ) - Electron is denoted by 'e' and is a negatively charged particle. The absolute charge over an electron is equal to 1.6x10-19 of negative charge and is considered equal to 1.

The relative mass of electron is 1/1836. Since the mass of an electron is very small, thus it is considered equal to 0. Electrons revolve round the nucleus of atoms.

The absolute mass of a proton is equal to 1.6x10 -24 g and considered equal to 1 as it is equal to the mass of 1 hydrogen atom. Proton is present in the nucleus of atom.

Neutron (n) Neutron is denoted by 'n' and is a neutral particle.

Nucleus The centre of atom is called nucleus. Nucleus comprises of neutron and proton. Nucleus of an atom contains the whole mass of an atom.

In 1897; J. J. Thomson, a British physicist, proposed that atom contains at least one negatively charged particle. Later this particle was named as electron. Thomson called those particles 'corpuscles'.

Ernest Goldstein in 1886 discovered the presence of new radiation in gas discharge tube even before the identification of electron. He called these rays as Canal Rays. His experiment led to the discovery of proton.

In 1932 J. Chadwick discovered another subatomic particle called neutron. Neutron is present in the nucleus of all atoms. 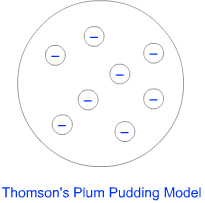 He proposed that electrons are embedded the way black seeds of water melon are embedded; in the sphere of positive charge. According to Thomson

(a) An atom consists of positively charged sphere in which electrons are embedded.

Ernest Rutherford in 1909 with his team bombarded very thin gold foil with α particles. He found that 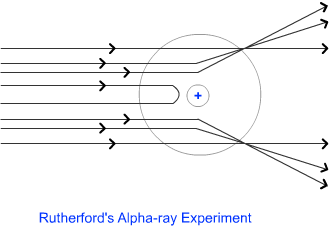 (a) Most of the α particles passed without any hindrance.

(b) Some of the α particles deflected from their original path at noticeable angle.

(c) Very few of the α particles bounced back at their original path.

On the basis of his observation, he proposed the model of atom. The Rutherford's Model of Atom is as follows:

(a) Most of the part in an atom is empty.

(b) There is a positively charged center in atom, which contains nearly the whole mass of atom. The centre is called nucleus.

(c) The size of nucleus is very small compared to an atom.

(d) Electrons revolve round the nucleus.

The Rutherford's Experiment is also known as Geiger-Marsden Experiment.

(a) According to Rutherford's Model, electron revolves round the positively charged nucleus which is not expected to be stable. But a charged particle in an accelerated motion along a circular path would lose energy because of radiation and finally would fall into nucleus. This makes an atom unstable while atoms are quite stable.

If atoms were not stable no matter would exist in nature.

(b) Rutherford model could not solve the problem of atomic mass of atom as it proposed only the existence of protons in the nucleus.

However, the problem of atomic mass could be solved after the discovery of neutron.

Structure of The Atom will be available online in PDF book form soon. The solutions are absolutely Free. Soon you will be able to download the solutions.

Forces and Laws of Motion